You don't have any saved vehicles!

Look for this link on your favorites:

Once you've saved some vehicles, you can view them here at any time.

CALL US FIND US
You Are Here: Home > 2017 Dodge Challenger Review

Even after half a century since its first-generation model was released, the 2017 Dodge Challenger is still building on its muscle car legacy. The Challenger of today offers an unmistakable aesthetic, exhilarating performance, and a large enough cabin for the whole crew to get in on the excitement.

To help you see if this sports car/sedan is the ride for you, our team at Price Motor Sales put together the following inside and out review. If you have any questions while you read, don’t hesitate to reach out to our Dodge dealership. Let’s start out by zeroing in on the Challenger’s advanced under the hood equipment. 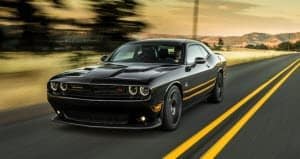 Refined, optimized, and fortified to deliver even more power and more intuitive response year after year, the 2017 Dodge Challenger brings top-notch performance to your daily drives around Cassville, Mt. Union, and Huntingdon, PA.

The Challenger’s available engines start mighty and get even mightier from there. The starting 3.6L V6 is an all-around performer that puts down 305 horsepower and 268 lb-ft of torque, while returning an EPA-estimated 19 city/30 highway MPG.

Those eager to ascend the Dodge Challenger’s engine lineup are met by three capable HEMI® powerplants, a brand with a name and heritage as strong as the Challenger’s. The top HEMI®, is a 6.2L V8 beast. Producing 700+ horsepower and 650 lb-ft of torque, it’s an enthusiast’s ultimate daily driver.

The 2017 Dodge Challenger may look like it’s most at home at the track, but it actually comes in handy at the soccer field, grocery store, and while en route to vacation much more than you’d think. 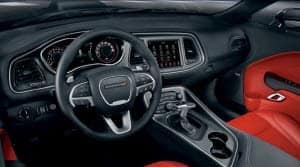 We’re talking about space, which abounds in the Dodge Challenger’s interior. There’s 42 inches of front seat legroom which can accommodate drivers of all heights and an unheard-of 16.2 cubic-foot trunk where getaway bags and wholesale groceries nicely nestle.

There’s even the versatility of a split-folding rear seatback so you can flip part of the back row down to accommodate more hauling when needed.

The 2017 Dodge Challenger may come from a long line of classic cars, but it’s technology is a thing of the future. On the outside, features of the Challenger’s exterior sport today’s latest features like LED headlights that shine from retro circular ringed housings.

Indoors, cutting-edge systems like Dodge’s Uconnect® infotainment platform with an 8.4-inch touchscreen and real-time stats from Performance Pages make a dynamic duo that were built for the modern muscle car driver.

There’s also an available navigation system with 3D maps, SiriusXM® Satellite Radio, and 18-speaker Harman Kardon® premium acoustics—you really can dial up the tech on your Challenger to your heart’s content.

With the style you crave and the space and tech you need, the 2017 Dodge Challenger is truly one of a kind. If you’re ready to get behind the wheel, get in touch with your local Dodge dealer serving Cassville, Mt. Union, and Huntingdon, and schedule a test drive today.

You don't have any saved vehicles!

Look for this link on your favorites:

Once you've saved some vehicles, you can view them here at any time. 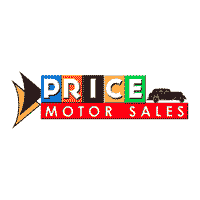